The project deals with the electrolyte in a lithium-ion battery, a mixture of special organic solvents accounting for up to20 % of the total mass of a battery cell. In mechanical recycling processes, the electrolyte is released during shredding or dismantling of the cell by evaporation. For electrolyte recovery, state-of-the-art vacuum drying systems are used reducing the electrolyte content to such an extent that emission protection is guaranteed in the subsequent processing steps. However, not all components of the electrolyte mixture are completely removed since low-volatile components with a high boiling temperature remain on and in various battery components and materials. To date, this amount has not been quantified, but initial estimates suggest that it is about 10-20 % of the total mass of the electrolyte filling of a battery cell. This residual content of low-volatile organic substances is not inert, it just evaporates more slowly, so that such electrolyte vapour can accumulate in consecutive process steps. Furthermore, the electrolyte acts as an unwanted process chemical in flotation and hydrometallurgical processes complicating an efficient processing there. 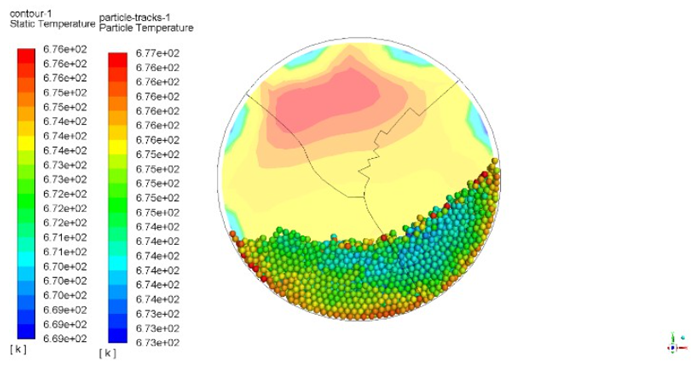 Simulation of the thermal load expressed via the temperature distribution of particles in a rotary kiln shortly before reaching thermal equilibrium at approx. 400 °C (TU Clausthal IEVB)
© TU Clausthal IEVB

The LOWVOLMON project thus aims to measure and identify the electrolyte components in the sense of process monitoring and data collection in order to obtain information about their whereabouts in technical processes. Based on this, a strategy is being developed and implemented on a laboratory and pilot scale that is capable of removing and recovering not only the low-boiling components of the electrolyte from the material stream at a very early stage in the process chain. For this purpose, equipment-based approaches for combining shredding and drying are being developed. Also, the drying process is being investigated, modelled and simulated in detail. In this way, it is possible to predict the technical complexity required for the complete removal of the electrolyte before further mechanical processing during recycling.

Furthermore, the mechanical processing is influenced by a thermal pre-treatment of the batteries, as the material properties, especially of the plastics and binder materials, change in the relevant temperature range. This necessitates to adapt the process control of the subsequent mechanical steps. This adaptation and additionally the view at the following hydrometallurgical processes enable a holistic view at the modified process chain. Therefore, LOWVOLMON provides a complete picture from the shredding of a battery to the concentrates as final or intermediate products. This modified process chain has the potential to increase both the purity and the yield of secondary raw materials, so that more economically relevant raw materials remain in the recyclable material cycle for battery production.